The Gospel According to a Map

Has the messiah come? Christians say yes, and they usually use the gospels to "prove" it, showing that Jesus fulfilled messianic prophecies. But many of those were about relatively minor details (e.g., where he'd be born) that could've been fabricated by the gospel writers. There were, however, much bigger messianic prophecies, and we can verify them without using holy books of any religion.

Back around 730 BC, God's people were divided: Israel in the north, Judah in the south. Israel was recently conquered and exiled by Assyria, and Judah was headed toward a similar fate via Babylon. Only a few people in Judah believed in God, even fewer in Israel, and practically nobody in the rest of the world. Other nations didn't care about Israel's God, because each one had its own gods. Israel and Judah were reviled and were essentially irrelevant in the world.

The prophet Isaiah offered hope to his people by telling them a king ("messiah") would come and establish a "kingdom" of unprecedented size and strength. Other nations would become followers of Israel's messiah and he would be a moral authority to them (Isa. 2:3). Through him, "the earth would be filled with the knowledge of Israel's God, as the waters cover the sea" (Isa. 11:9). Similar predictions were echoed by other prophets over the next couple centuries, but to no avail. Jerusalem was destroyed in 586 BC and its people exiled. The region was later conquered by Cyrus (Persians) in 539, Alexander the Great (Greeks) in 332, and finally by Pompey (Romans) in 63 BC. It probably seemed like the biblical prophecies would never be fulfilled.

Over 2000 years later, the world looks a lot different. Most of the popular gods of the ancient world (e.g., Baal, Dagon, El, Molech, Asherah, Osiris, Isis, Chemosh, Hadad, Artemis, Zeus, and Caesar) are no longer worshipped. Others are mostly confined to particular regions. But there is one glaring exception. According to polls by Pew Research, the majority of people in the world (55%, including 81% outside of China & India) are, at least nominally, followers of the God of Israel. The following map shows countries (in blue) where the majority of the adult population professes Judaism, Christianity, or Islam as their religion. 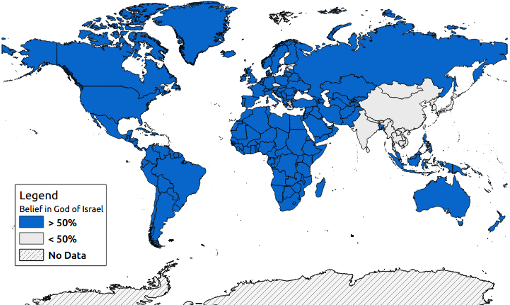 As someone who makes over 600,000 weather predictions every day, I know well that correct predictions aren't necessarily evidence of divine revelation. But I also know that consistently accurate predictions always are based on analysis of past data, accurate assessment of current conditions and/or recent trends, a correct understanding of how the universe works, or some combination thereof. These explain how meteorologists can make (somewhat) accurate predictions of future weather, futurists and science fiction writers can predict future inventions, and political analysts can (sometimes) predict the next president. But they don't explain the messianic prophecies.

There is nothing to suggest that the unprecedented events that were prophesied were logical inferences from the available data at the time. Quite the contrary! The data pointed much more toward Israel and Judah being destroyed like most of their neighbors and their God ending up like Baal, Chemosh, Asherah, and the others, as minor footnotes in history.

We don't need to take the Bible's word for it. These are well-attested historical facts, as is the fact that the prophetic books were written long before Jesus was born. It's possible that the messianic prophecies were extremely lucky guesses. Verification of them is not proof of messiahship or divine revelation, and parts of them have not yet been completely fulfilled. But if "evidence" means a body of facts that is more probable if the hypothesis is true than if it is not true, I consider it strong evidence.
Posted by Matt Haugland at 3:19 PM