Discussing God can be difficult because "God" can mean very different things to different people. It would be nice to define God in a simple way that covers all possibilities, and even better if we could do so mathematically.

I'll start with a few examples. This list is very incomplete but represents data points that have a large variance:

Now I'll get more quantitative. I rated the example definitions of God on a 0-10 scale for a variety of attributes:

It's possible to represent all of these attributes with a single variable by applying Principal Component Analysis (PCA). PCA is a statistical method for reducing the dimensionality of a dataset (i.e., reducing the number of variables needed to represent most of the variance in the data). It combines multiple variables into new variables that are linear combinations of the original variables.

The first principal component is the new (combined) variable that explains the most variance in the data. In this case, it is equal to 0.38*Specificity + 0.46*Impact + 0.48*Ability + 0.42*Supernaturality + 0.49*Knowability. Some variables have lower coefficients (e.g., Specificity), not because they're less important but because they're not as strongly correlated with the other variables. To convert the first principal component to a 0-10 scale, divide by 2.23. I'll call the resulting value the "God Index".

To demonstrate the meaning and usefulness of the God Index, I defined a new variable, also on a 0-10 scale:

Here is a plot of Prior Believability as a function of God Index: 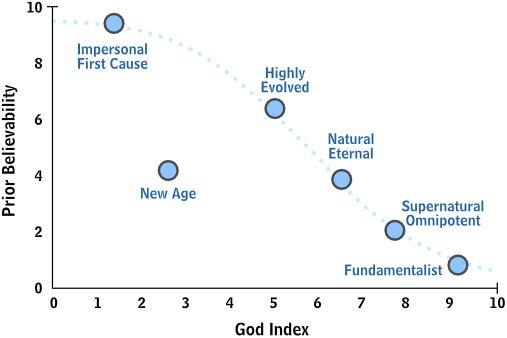 The New Age God I defined is an outlier, but keep in mind that a God Index of 2.7 does not in any way imply New Age. It only means a God with somewhat low values of the attributes I defined, of which my New Age God is merely one example. With the outlier removed, I fit a logistic curve (the dotted line) to the data. The formula is (where G = God Index):

The formula can be used to derive a probability density function that allows us to apply Bayes' theorem with a continuous prior probability that covers all possible definitions of God.

Because Prior Believability is analogous to Bayesian prior probability, the above equation (and graph) helps explain the futility of most debates between atheists and theists. Atheists usually define God with a very high God Index (in the 9-10 range), while most theist arguments apply to a God in the 1-3 range (even though they may be arguing for a specific Christian God with a value around 8). It follows mathematically that their thresholds for what would constitute sufficient evidence for a God are vastly different!

Personally, I'm not very interested in a God in the 0-3 God Index range, because such a God would be practically irrelevant. What interests me most is the God of First Century Judaism. The reason is simple: all three major monotheistic religions (Judaism, Christianity, and Islam) are rooted in First Century Judaism, and all three affirm that the true God lies within it.

There was a wide range of beliefs among First Century Jews, but all affirmed the Torah (first 5 books of the Tanach/"Old Testament") as foundational, so that's where I'll begin. Before considering specific evidence, I'd estimate that the God of the Torah is probably in the 5-9 God Index range, perhaps with a peak (of the probability distribution) around 7. Applying my 5% rule (i.e., don't assign probabilities outside the 0.05-0.95 [5%-95%] range without bulletproof reasons), I get the following probability distribution (which should change as new evidence is considered): 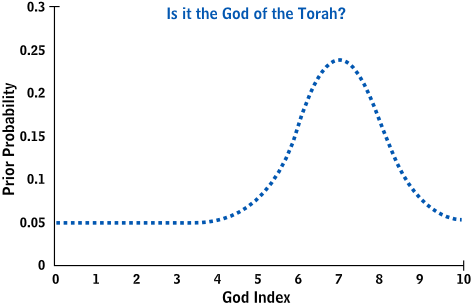 Of course, there are other dimensions of God definitions that are not captured by the God Index, and I'll eventually get to those; but I think the God Index adequately represents the most essential differences between most concepts of God. It's imperfect but useful. It's a good alternative to single definitions that almost nobody can agree on, and it works very well with Bayes' theorem. Instead of investigating single concepts of God, now we can investigate all of them at the same time.
Posted by Matt Haugland at 6:44 PM